Get up in standing, moving and walking with assistive devices

Together we improve the quality of life for individuals 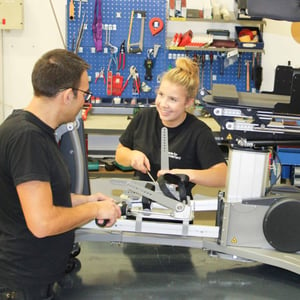 The ability to move is something most of us take for granted. Our experience has shown us the life-changing impact that movement has for people whose mobility has been affected by disability.

For us, quality of life is closely linked to an individual’s health and well-being, where physical, mental and social aspects are successfully integrated:

We believe that movement and activity improve both health and well-being, regardless of a person’s physical level of functioning. That’s why Made for Movement is dedicated to helping individuals with severe physical disability get into an upright position and moving.

We work with individuals, families, other caregivers, therapists and physicians to design help-aids that are clinically effective and offer practical, everyday benefits.

Our innovative movement aid solutions are made possible by our investment in technical development and research excellence. Our product development team is based in Skien, Norway and combines expertise within electrical and mechanical engineering, 3D drawing and product design. The development department, working closely together with our other teams and, most importantly, getting feedback from your user experiences, is committed to user-focused, cutting-edge technical solutions.

Our highly-skilled assistive technology consultants are your main point of contact with us. They coach you individually, sharing their extensive knowledge of our assistive devices to advise and motivate users, caregivers and therapists. They ensure our customised help-aids are adjusted correctly, following up with each individual to help optimise user outcomes.

Training, education and support from Made for Movement’s teams is a vital part of our solutions. We have fully integrated these elements into our service to give you the reassurance that your needs can be met.

The history of Made for Movement

Creating opportunities for people with severe disabilities to participate in everyday activities.

The two founders of Made for Movement, Norwegian pair Ånund Olsen and Erik Vegge, were inspired to begin the company back in 1995. After winning the support of British medical technology developer David Hart, he licensed them to produce the original NF-Walker, launching it in 1996.

In 2007, Ånund Olsen competed in a Norwegian TV program for entrepreneurs called “The Creator”. He entered with his latest innovation, which was enough to win the whole competition. With that, the Innowalk was born.

Since 2008, Innowalk has been produced and distributed by Made for Movement all over the world.

Over time, both the NF-Walker and Innowalk have evolved, being made available in several variations to better serve different needs. E. g. in 2011, the Innowalk Pro, developed for clinical practices with simple, adjustable size features, was launched. In 2016 the next-generation NF-Walker 2 was launched, taking dynamic standing and walking further than ever before.

Today, Made for Movement is a market leader, providing mobility through dynamic standing and walking aids for people with severe disabilities. The head office is located in Norway, but with offices in Germany, Sweden, UK and the Netherlands, and representation in another 14 countries and with thousands of users, we are growing to become a global company.

As we keep moving forward, we want to help you do the same.